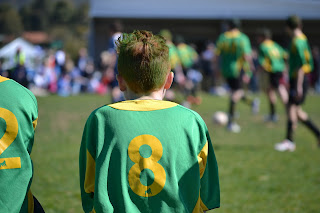 We had an early start this morning...well early for a Saturday anyway...ready for Master 15's big Grand Final.  It may have been the first day of spring....but it was absolutely freezing and I don't do cold well.  So I dug out the thermal underwear, the beanie and the parka and I was right to go...until I realised I had inadvertently dressed in the opposing team colours and had to do the quick change with just minutes to spare.   In hindsight it may have been an omen for what was to come.

We had to contend with the freezing wind, a team that had certainly peaked at just the right time of the season (we had played them 4 times throughout the season for  3 wins and 1 draw) and a swooping magpie.... that certainly wasn't playing for our team.

The opposition had taken a shot at goal....just as our keeper was attempting to knock it out the little rotter swooped.  It was either bat away the ball or the bird...he chose the bird...they scored!!!

So in a game that's notorious for it's frustrating lack of scoring we actually had a fair bit of action...final score....

Success was not to be ours this year.
Posted by Angels have Red Hair at 21:32