I came across an old family photo today. 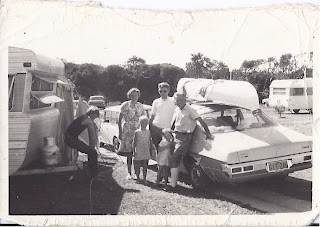 It was taken many years ago on a summer holiday to the beach.

Like so many family photos of it's era, it includes the family car.  It is obvious that the family car held a very significant place within the family dynamic at this time and it was often proudly portrayed within family portraits.  How many of us have similar family shots....I wonder??

Anyway, it got me reminiscing....not about the family as such.....but about those cars that have played such an important part in our lives.

To me the car has always just been a way to get from A to B....for others I know it means much more.  I know in some families it is a revered object....probably looker after better  than the kids...

So for old times sake I thought I'd look back over my family automotive history.

The first (I've been told) was a Holden FB.  It may or may not have looked like this...

......I only have one memory of this car.....the interior roof was red with white stars on it.  I can only assume that I spent a lot of time on my back looking up when we had this car.

When I was around 3 or 4 a new car arrived, amidst much excitement and anticipation.  I can distinctly recall bursting out the front door and running down the driveway as Dad arrived home with the new car.

It's seen in the picture at the top.

It was a silver Holden Kingswood with bench seats, brown interior and no seat belts in the back...or if there were we didn't use them.  I can recall family  road trips....hanging my head out the window....because it was so hot and there was no air conditioning....the vinyl seats would get so hot your legs would stick to them.  I can also remember being left alone in the car at one time and discovering the cigarette lighter...you pushed it in and it popped out when it was ready.  Oooh pretty, I remember thinking as I stared at the red hot element...then sticking my finger in to touch that pretty shining thing....ouch!!

Then came the silver Honda Accord.  I think this one came along when I was about 12 or 13.  We thought this one was pretty posh.  Everyone got a seat belt here and by now the laws were changed and we had to use them. 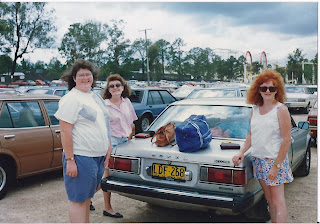 By 19, I had finished school and was settled in my first job.  It was at this time that I decided it was absolutely imperative that I have a hatchback.  I applied for and received my very first bank loan and bought this.......a Ford Laser.... 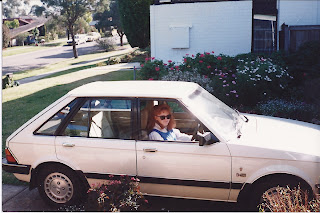 I tricked it out with seat covers and the obligatory suction cup Garfield on the back window.....

It was sweeeet and I was the bees knees...despite the fact that it leaked in the rain, the air conditioning only worked occasionally and it wouldn't start for anyone but me.

This is the car in which I first left home, met Hubby and got married.

...we didn't want to waste time thinking about these things!!!

A brand new 1996 Ford Festiva...with metallic paint and air con that worked (ahhhh the luxuries).  This is the car in which we had a family (well not literally), bought our first home, sold our first home, moved to Melbourne.  Drove up and down the Hume Highway many, many times.....until finally, we moved back to New South Wales and settled on the Central Coast.

This is the car we kept until 2011....at this point we sold it to the 16 year old girl next door with a clear conscience...because it was a great little car that never gave us any trouble and never ever broke down.

And now I have a Ford Territory (is this starting to sound like a Ford ad?)....seems I have settled into the suburban "Soccer Mom" stereotype.....

So that's my life story in automobiles.  Amazing how an inanimate object can evoke so many memories.

Perhaps that's why it so often had pride of place in the family portraits. 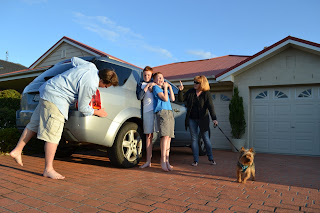