Hubby has taken the day off work today.

I believe it may be to give him the opportunity to take some quiet time and mentally prepare himself for the evening ahead.

Tonight the Sydney Swans go up against the Collingwood Magpies in the AFL (Australian Football League...affectionately know as Aussie Rules) Preliminary Final.

The winner of this match goes through to the Grand Final.......the loser goes home.

Winning tonight does not promise to be an easy task.

There isn't a team in the AFL that you want to beat more than Collingwood.

Now Collingwood supporters...what can I tell you about them....I don't want to appear biased so instead of using my words I will quote the Urban Dictionary....... 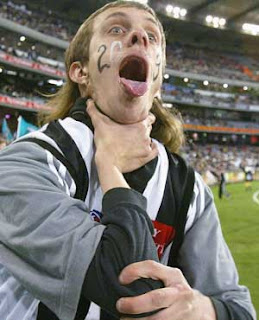 Now in an attempt to be fair, and portray a well rounded, accurate picture of the Collingwood supporter I thought I would also add some photos of  well mannered, well behaved fans of good quality.....but I couldn't find any.....

So come on Swans....do it for all your latte sipping, eastern suburb yuppie supporters....and a few ring ins from the central coast......SMASH THOSE MAGPIES!!!!!
Posted by Angels have Red Hair at 10:49