Buster had an appointment at the vet this morning...he had to get a jab and a haircut....if only we could get our pesky medical issues attended to while getting a good wash, cut and blow-dry.  So I dropped him off at 9.00 and was told to pick him back up at 1.00pm.

That left me at a loose end for 4 hours and I was tantalisingly close to a large shopping centre.

"I'll just drop in for a few minutes...then I'll get back home and knuckle down to some good housewifely duties".....hahahahaha!!!

I'll just briefly refer to the message that Hubby gave me on Tuesday......."don't spend too much"!!

Before I begin, let me just say in my defense, that we are heading overseas in about 6 weeks, and it will be close to winter over there, and I really had to take advantage of all the sales that were very considerately getting rid of their winter stock as we head into summer.  It would have been ludicrous to not buy these things.  Not to mention we really have to support the ailing retail industry...they're doing it really tough at the moment....and I'm very community minded like that...I like to help where I can.

So though I meant to drop in for just a few minutes, and maybe pick up a loaf of bread, I accidentally came home with......

I am considering getting one of these signs and sticking it on my wallet....but only if it's on sale. 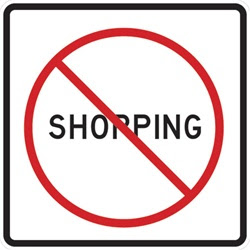