Last year Master 12 learnt the truth about Santa Claus, the Easter Bunny and the Tooth Fairy.

It was a triple whammy for him.

He had been told they were true all those years ago and he continued to believe it until he was told differently by people he trusted...."you can't believe what kids at school tell you".

The absence of Santa was a little upsetting....but he was actually somewhat relieved to find out that there was no fairy creeping into his room at night and nicking off with his teeth.

He admitted that at one point he had become suspicious...and he did what all children of this day and age do....he googled it.

He said the tooth fairy was described as a mythical creature....but he didn't know what mythical meant....and he must have lost interest or been distracted.....because he didn't bother to use google for a  definition.

Now, even though the truth is out there...he has no intention of missing out on the chance of a quick  buck.

He lost a tooth yesterday and his immediate reaction was to brandish it at me and declare that it was a molar and therefore definitely worth two dollars.  At which point he went and put it into the pot where I have been hiding his baby teeth for all these years and helped himself to a gold coin from my wallet!!

The fairytale is well and truly over...thank goodness he doesn't have many teeth left to lose. 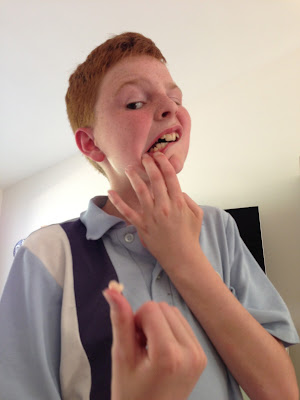 What do you think....is it weird and creepy that I have kept my kids baby teeth?