Hands say so much about a person.  About their age, the type of life they've lived and just who they are.  If the Police have a Jane/John Doe...they don't rely on a visual identification...they go to the hands...because that is where everyone is truly an individual.

I remember my Dad's hands...he passed away when I was 17....sometimes it's hard to recall his voice....but I can still see his hands.  They were strong, rough, hard working, rugged hands. 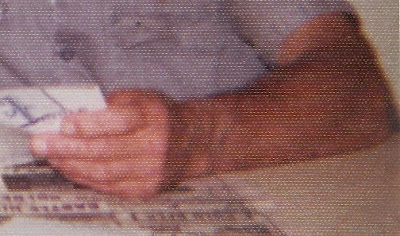 There was nothing soft or dainty about them...they were made to work hard and they did.  They were farmer's hands...they were calloused....they could make things....they were handy hands.

Mum had rough hands too.  I held those hands two years ago....just before she left us forever.

They were hands that went to work when the family needed money......in the only type of job they knew how to do....as a cleaner at the local school.

Those hands were never still, if they weren't working they were gardening or mixing up a cake, or beating cream or kneading dough.  If she was resting they were knitting...click clack....never still.  As they aged and she slowed down they were still busy...even if it was only doing crosswords.

Those hands were never idle.

As I searched for a picture which showed my Mum's hands....I recalled a drawing I did many years ago when I was still at school.  I'm glad I kept it. 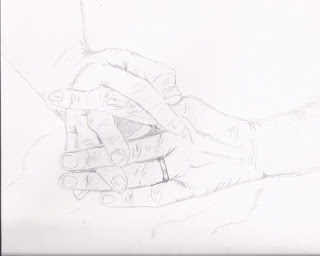 The hands of both my parents told their stories...the story of two lives, hard lives, well lived.

Recently Hubby put a photo up on Facebook....of me.

My Sister called me..."I looked at that photo and I thought 'Oh it's Mum's hands'" 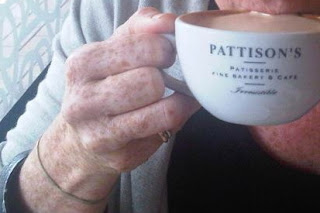 I'm lucky....my hands will never know hard work like hers did....but it's nice to know I have a little piece of Mum with me always.