Hubby and Master 15 recently had a day out to the cricket at the SCG.

Upon their return it was discovered that they had very irresponsibly not worn their sunscreen or their hats.

It was discovered because the evidence was all over their faces.

Hubby got a little hot under the collar...though that could have been from the sunburn....when I tried to take a quick photo.  He dared to pronounce that he didn't need his entire life to turn up on my blog.......why, I've never heard the like!!  I was in fact trying to record the moment to be used as evidence against him in the future.

Suffice to say he looked very similar to this..... 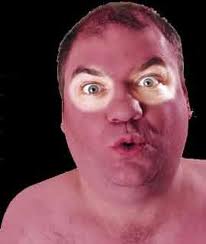 So now....due to his cheek and insubordination....what may or may not have even rated a mention is now scoring a post all of it's own!