Can this week please be over yet...please?

You could say this week has been a challenging one....or you could just say it has been complete shite!

Monday.....I took the boys to the orthodontist.....where I received an eyewateringly large quote for braces.  This provoked a bit of a blue between Hubby and myself....the number one cause of blues between spouses is after all....money....and we are going to need a lot of it.

Then....I have been protecting the carpeted areas of our house for the last 2 and a half years...ever since we got Buster...with baby gates.  On Sunday I decided that since he hadn't had a single accident in the house since October last year I would remove them.....then on Monday he peed three times.....on the carpet.  Perhaps feeling traumatised by his actions of the day before...perhaps all that unexplored carpet was too much of a temptation....perhaps he just wanted to pee me off....whatever!!

Tuesday....Hubby left...not for good....just till Friday night.....leaving me alone with the boys.  Not really a problem...except that in the middle of the night the smoke alarm decided to go off....for no particular reason.....which of course woke me....and then I spent the remainder of the night lying there waiting for it to go off again.

Thursday brought with it the computer difficulties...which I spoke of yesterday....I swear that episode took a decade off my life.

Which brings me to Friday.

I was clearing up a bit.....trying to find the table under all the stuff that had managed to accumulate there.  One of the culprits was my basket of paints....and my jar of brushes.  I have a little spot in the laundry cupboard where I keep them....so I took them in there.  For reasons unknown, when I organised the cupboard I made the spot for the basket on the top shelf.  I'm not completely daft...so I decided to put the glass jar of brushes up on the shelf first...so it couldn't fall out of the basket as I raised it up.  Then I lifted the basket up to slide it onto the shelf.  As I raised it above my head...the thought crossed my mind..."this is a bit heavy....I probably should move it to a lower shelf".  At that exact moment the shelf decided to give way. The forward slide of the basket went into reverse...back onto my head....and the glass jar holding my paintbrushes went hurtling to the floor....luckily just missing my face...my eyes....my arteries.....where of course it shattered into a thousand pieces.

That glass went everywhere...in every conceivable spot...and a few inconceivable ones too.

By the way....the basket NOW resides on the bottom shelf..... 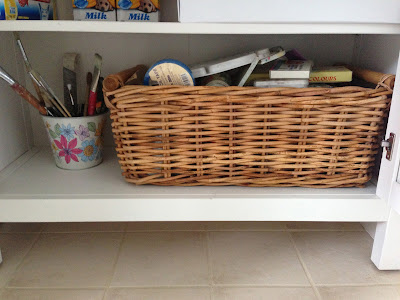 ....and I'm ready to reside at a Mental Health Facility.