It's great when as the end of the school year approaches you get a couple of letters in the post.  The ones that have been sent from the Principal.  The ones that tell you it would be a good idea to turn up at the Presentation Assembly and bring your camera...because your child is getting an award.

Well I'm having a good end of school year...because I got three of those letters this year...and I've only got two kids.

Today was the High School Presentation....Master 15 received an Academic Excellence Award for Law.....of all subjects.  I can certainly attest to his ability to argue...so perhaps he can use this competence to his advantage.  I have often told him to join the Debating Team....he was born to debate. 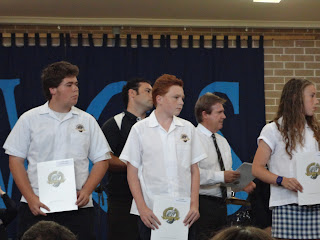 I had also received a letter to tell me that Master 12 was getting an award at the High School Presentation.  He is just finishing up in 6th Grade....but the boys attend a K-12 school.

He very proudly accepted his Gold Award.  This is presented to the student who has, over time, received 45 commendations and who has also performed some form of Community Service.  Congratulations Master 12! 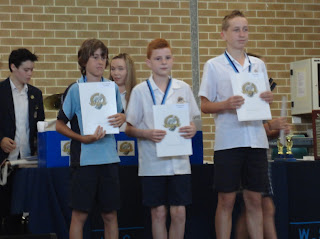