It is traditional in our house to put up the Christmas decorations on the 1st of December.

Due to several unavoidable issues....this did not occur in 2012.

Firstly the 1st of December fell on a Saturday.....which meant that Hubby was out all day playing cricket....when he finally arrived home at around 7.30pm it was only to have a quick shower and then rush out to his work Xmas party....dressed like this..... 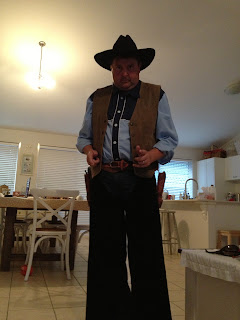 Secondly, the Christmas decorations reside for 11 months of the year in our roof cavity....otherwise known as the hottest place on the planet.  It would have been suicide to attempt to climb up there in the temperatures we (didn't) enjoy yesterday...40 degrees outside....add at least another 10 degrees to the roof cavity.  There would have been something vaguely ridiculous about dying of heat exhaustion while in the process of removing fir trees, tinsel, frosty baubles and snow scenes from the roof.

Thirdly, I was nursing my head cold and sinus migraine and basically couldn't be bothered.

So today seemed like a better option.....note I said seemed.

Hubby didn't get home till 2.30am...as a result he was a little tired and emotional today....read hung over and cranky.

I was up at 6.30am to drive him there, despite still feeling like crap.....and having endured a migraine until 3.00 in the morning....when I finally gave in and dosed myself up on Nurofen Nuclear Strength.

By late afternoon everything was still in the roof......after several gentle reminders....they were dumped in the lounge room.

Hubby then ordered Master 15 to set up the tree.  He didn't want to....cue teenage angst and general feelings of resentment..... 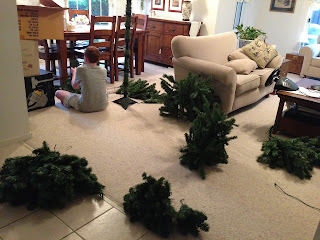 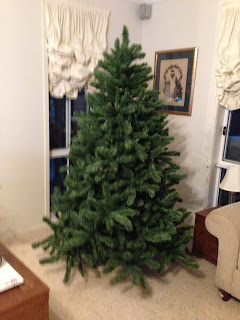 Hubby was asked to do the lights....as is the family traditional....due mainly to him being the tallest member of the family....which he did in a very unorganised, haphazard way.  This did not please my OCD tendencies one little bit.  So once he left the room they all had to be removed and reapplied....not easy when the tree stands well taller than you do.....and still an unsatisfying gap has been left lightless!

At this point it was decided that as Christmas is about goodwill to all men and we couldn't even dredge up a little bit for each other....all further decorating would be adjourned until tomorrow night.....