So Hubby, who may well be in the midst of a mid life crisis, has decided to take up cricket again.

He played throughout his teenage years and then on into his twenties.

After I met him I didn't mind that he disappeared all day Saturday....it gave me the chance to get together with friends, family, go shopping, get my hair done etc etc

Then Master 15 came along and all that changed.

I was enjoying motherhood (read between the lines....suffering with a crying baby, dirty nappies, vomit, and loads and loads of laundry) all the working week long....and I'd be blowed if he was going to escape from it on Saturday as well.

So my foot came down...and his cricketing career was over.

The years passed...and so did his fitness.

But now he has decided he'd like to take some "him" time......and with the kids now old enough to deal with their own bodily functions....I surprised him by agreeing!! I think he thought he would get an argument out of me....and was possibly a little peeved that I agreed to him disappearing all day every Saturday throughout the summer so easily.

Training started a few weeks ago....and as a result he has discovered that he has a bad back, a tricky knee and that physical exertion disables him from simple tasks like walking for a day or two after each session.

It's hard to admit that our bodies don't cope quite as well as they once did, that we might be getting....gasp....old....but there's a little clue in Hubby's recent purchases...... 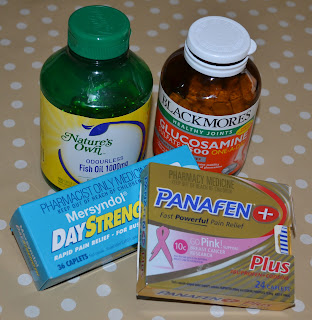 The final training session before the start of the season was held on Thursday night and final team selections were made. After such a long absence from the game Hubby was expecting to get selected in fourth grade....second grade at an absolute push.  He came home in shock, and perhaps a little terrified....he's been selected in first grade....seems the old man can keep up with the young whippersnappers after all.....but I'll have his "supplies" ready for when he gets home!!
Posted by Angels have Red Hair at 15:52