A catastrophe ... of epic proportions ...

I have a major catastrophe on my hands ... and it is growing in magnitude by the day.

It all started last week.

Buster had a little hurl ... alas ... he chose the cream coloured carpet in the formal lounge as the ideal place to deposit his regurgitation.

As is the way of such things ... the puke bore little resemblance to anything he had been fed ... instead it was a fluorescent yellow colour. 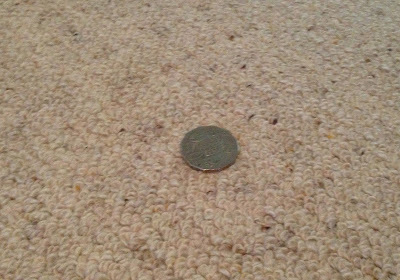 Nothing to worry about ... right??

Now I am somewhat fastidious when it comes to things like marks on carpet ... you might call me a little fussy ... you might even call me a full blown raving Obsessive Compulsive.  If you did call me that you'd be spot on.

So I removed the offending upchuck ... and pursed my lips in distaste at the little mark left behind.  I went to the cupboard and found a spray-on carpet cleaner ... followed the directions ... and tended to the carpet.

Imagine my horror when the stain remained ... and had in fact doubled in size.

So then I tried a powdered carpet cleaner ... which did precisely nothing ... the stain remained.

I moved on then to the old tried and true white vinegar and bi-carb soda remedy.   The stain grew ... and grew ... before my very horrified eyes ... it was without a word of a lie around ten times the size it had started out as.

So then I went out to the pet goods store and purchased a carpet cleaner for pet type stains ... and returned home $30 worse off.

I followed the directions ... and watched in horror as the stain grew yet bigger. 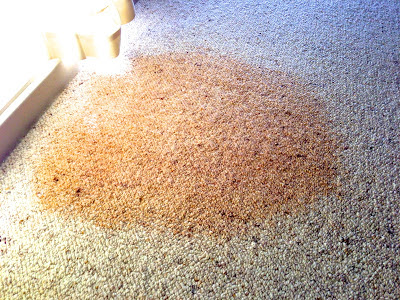 There was a major risk of hyperventilation at this point ... so I had to walk away.

But every half hour or so I went back to check ... in the hope of a miracle having occurred ... it didn't.

By now I was in a permanent state of high stress ... and couldn't go near the lounge room without a migraine threatening.

There was only one thing left to be done ... in my mind.  I went out to the shops ... and paid around $300 an awful lot of money for a carpet shampooer.  Which I have used every singe day for the last three days.

Here is the exorbitantly expensive catastrophe as it stands today. 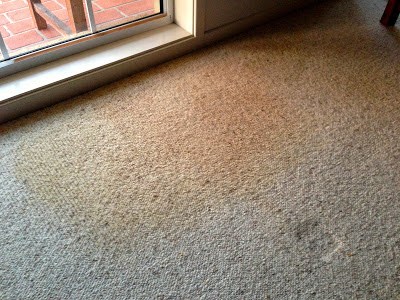 A little lighter ... BUT EVEN BIGGER!!

I will continue to shampoo this piece of carpet until ..

Does anyone have a perfect, fool-proof, carpet cleaning remedy they can share??