Earlier in the week the 2013 Sydney Swans Membership Guide arrived in the post.

It was promptly filed in the "Non-Urgent...open at a later date....if you remember" section AKA shoved behind something, under something...somewhere on the kitchen bench.

Then last night, Master 15 was looking for something to peruse while he consumed a bowl of ice cream.  He dug around a bit and happened to come across the Membership Guide in it's hiding place.

He opened it and got reading....shortly afterwards he called out excitedly "Have you seen this?"....which of course I hadn't as he had only just opened it.

So I wandered over to discover what was causing his agitated state.

Grinning broadly from page 43 was a vaguely familiar bunch of people.... 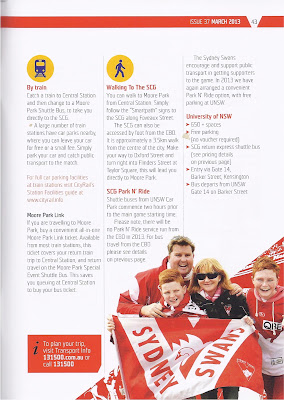 Now that was unexpected!!