It was a bit of a rest day today....thank you says my feet!

We caught the subway from our hotel to Union Station....where our train back to New York was departing.

The train took around 3 hours to get us back to New York.....my feet breathed a big sigh of relief at the small break.

Master 15 experienced a little mishap on the trip back. Our carriage had a bathroom at one end and he decided to take advantage of the amenities. Similar to an airplane bathroom, you enter and slide the lock in place....which he did. Then as he was taking care of business he glanced to his side and realised that he had not actually locked the door and it was in fact standing wide open.....epic fail!

Back in New York we made our way straight to the taxi stand and waited for a cab to take us out to our hotel near JFK airport.

I thought I would never get out of that cab alive!! Picture....if you will.....crowded New York streets and crowded New York freeways. Add to that a cab travelling at around 100kms per hour, jumping from one lane to another, careening up lanes that do not really exist, exiting the freeway and speeding along suburban streets and then re-entering the freeway in the hope of getting a few cars ahead. Barreling up the break down lane at break neck speed, then swerving to avoid the debris eg a huge truck tyre lying in said break down lane .....all without dropping below 80 kms. I sincerely believed that we were in a life threatening situation.....but he made excellent time!!

So this is the last night on the east coast of the US, in the morning we fly out to Las Vegas for the next chapter in our adventure.

On a side note, Master 15's iPod privileges were revoked due to gross unkindness to his younger brother....this is how how he decided to pass his time on the train...... 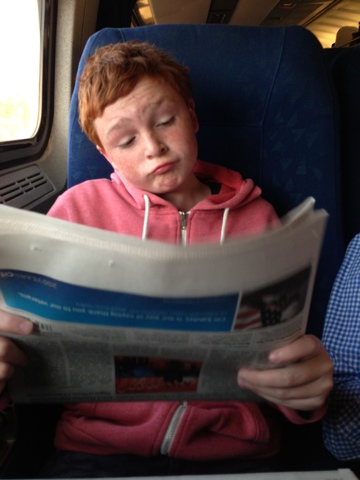