Some "thing" happened on Saturday night......

Now that I have reached a certain maturity, Saturday nights have taken on a somewhat predictable and staid format.  They usually involve me trying to avoid watching football (no easy feat in an AFL mad household) ... getting into my pyjamas early ... playing a game or two or three hundred and sixty eight on my iPad ... and if I'm really living it up getting a takeaway for dinner.

Hubby had warned me a couple of weeks ago that there was a "thing" on for work.  This warning went in one ear and out the other and was promptly forgotten ... or perhaps ignored and disregarded ... because work things aren't always the most exciting events ...especially when you don't actually work there yourself.

So when I suggested late in the week that we get stuck into our arbor project this weekend ... I was firmly reminded that we had a "thing" on.

So I begrudgingly got ready on Saturday afternoon ...because we had to leave by 4.00pm ... to be in Newcastle by 5.00pm ... to have a few drinks and dinner ... before arriving at the "thing" by 7.15pm sharp. Hubby loves a good timetable.

Once ready I took a selfie ... with a duck face ... cause according to Master 13 that's what girls do before they go out!

Upon arrival ... at 7.15 sharp ... we were ushered inside past the waiting throng ... into a private area.  Once there we were introduced to a few old friends ... well they felt like old friends being so familiar and all.

Then once we had caught up ... and been put on their Christmas card lists ... and invited to join them on their next family holiday ... we went back out and took our seats ... and our new mates put on a little show for us! 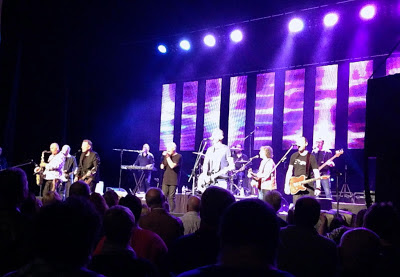 Hope we have a "thing" next weekend too!!