Well there goes the second and final week of the school holidays.

The second week was spent as lazily as the first with a just few dramatic flourishes thrown in.

Master 13 was very despondent over his lack of PlayStation.  It gave up the ghost early in the first week of the holidays.  Clearly the PlayStation Gods have a very wicked sense of humour ... because school holidays ... when you have no particular activities or trips away planned ...  is not the optimal time for a PlayStation to break down.

We didn't want to send it off to Sony to be repaired ... it is 4 years old ... and we could probably buy a new one for the cost of the postage.  But trying to find someone "local" to repair it was no easy task.  The best option we came up with was a dodgy little place in Chatswood ... a mere hour and a half drive away.  Not worth it you may say ... but try telling that to a 13 year old boy with a face like this. 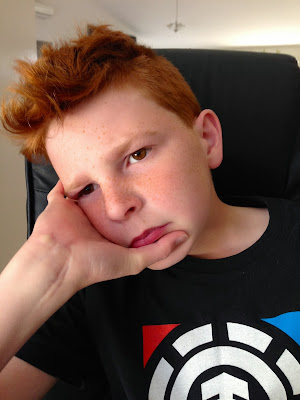 So I took it down and I went back and collected it a couple of days later ... and that is 6 hours and $110 I will never see again.

I went to the hairdresser this week.  Just a trim ... nothing fancy ... but she did something clever with her hair straightener that left me with glamorous and artfully tousled curls.  I forgot to take a picture ... oops ... so you'll just have to take my word for it.  Since then I have been trying to recreate the effect with zero success. 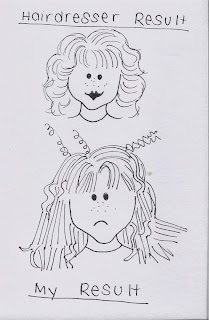 The only thing I HAVE managed to achieve ... is to burn off all my fingerprints.  So if I ever decide to embrace a life of crime ... I'm good to go.

But Master 16 was unappreciative of his nocturnal visitor and decided to knock loudly on the wall when it made it's creepy, scratching noise.  This in turn roused Hubby from his usually impenetrable sleep ... he then dived dramatically out of bed ... and went racing through the house in search of the burglar who was kindly announcing his arrival by knocking first.  Somewhat expectedly, he was unable to locate the intruder and I was able to advise him of the source of the knocking.

Hubby was distinctly unimpressed by the entire situation, "GREAT ... now I'm wide awake ... why did he have to knock ... I'm wide awake and I'll never manage to get back to sleep .... ZZZZZZZZ"

The noise persisted throughout Friday ... always in exactly the same spot ... and the best we could surmise was that a bird had somehow gotten into the roof and fallen into the wall cavity.  Once there it was unable to fly out.  We assumed that if it was a mouse in the house ... he would not have the same inability to move from the one spot.  By Friday evening the noises were only occasional ... by Saturday morning ... they were no more ... and neither I guess is their source.  RIP strange creepy, scratching thing ... and please, please please don't let the house be soon filled with the scent of Eau De Rotting Carcass.

In other news ... cricket season begins today ... so farewell Hubby ... see you next winter.