Love hurts ... or at least creates a mild discomfort ...

I'm sure that you've all been waiting with bated breath for the next instalment in the soap opera and/or romantic comedy that is Master 13's love life.

As you may (or may not) recall, Master 13 found himself ... somewhat accidentally ... with a girlfriend.

It didn't take long for the relationship remorse to start sinking in.

He approached me with the serious expression and demeanour of one with the weight of the world upon his shoulders.

Master 13 doesn't appear to be "ready" to make his own bed or butter his own toast ... he definitely isn't "ready" for a relationship.

Now I am a girl ... and as such ... I  immediately felt sympathy for the young starry eyed girl that is about to get her heart smashed into a million pieces (or not).  I've met enough "mean" boys in my time to know for certain that I don't want one for a son.

So in order to preserve everyone's feelings and avoid any smashed hearts (or not) ... I suggested the softly, softly approach.

"What if you just go to school and be nice to her ... and by next week she might decide she likes someone else?"

Fast forward to the end of the school day and Master 13 positively bounces through the door.

All without having to address a SINGLE word directly to the Starry Eyed Girl. 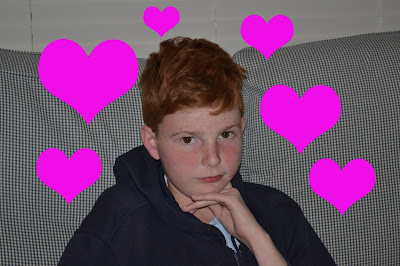 P.S.   There appears to be no hard feelings and they plan to remain friends ... they may even speak to each other at some time in the future.