It's one week till Christmas....and I only sat down to write my Xmas cards today....oops! 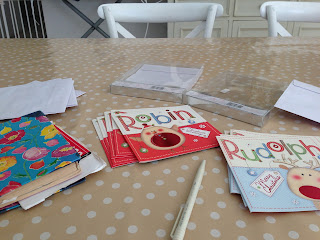 Of course if I was organised I would have done this at least a week ago...but where would the fun be in that?  Come to think of it...where is the fun in it at all?

Is it just me...or have people stopped sending Christmas cards?  I'm sure each year we receive less and less....partly due to the fact that I send mine out later and later!

But in this era of social networking...have we lost the art of writing out a card and....gasp....posting it?