Time for some relaxing weekend sport......

So it's Saturday and that can only mean one thing....Hubby is AWOL playing cricket again.

On top of this, the team actually won....in spite of the presence of a "mature age" player amongst the teenagers and uni students.

So playing in first grade seemed to work out ok....he hasn't been demoted......yet.....but then they don't see him moaning and groaning about his aches and pains all week like I do!!

Along with all his general misery....bad back, tricky knee and sore muscles....he had a new injury to complain about.

Fielding in the deep and returning a ball using his self proclaimed "bullet arm".....Hubby felt an ominous pull/tear/rip in said arm and shoulder.  Of course he continued to play....couldn't be seen as soft and unmanly....he saves that behaviour for me....don't you Princess!!

All this week he's been in Whinge City....population 1.  Of course he hasn't been to the Doctor....doesn't want to waste the money.....he'd prefer to self diagnose and keep the pharmaceutical companies afloat by adding to his  previous drug stash with these....... 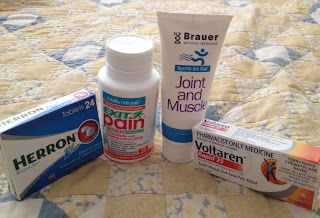 It seems to be beside the point that all of this cost way more than a Doctors visit.....but logic isn't one of Hubby's stronger talents, especially when he's in pain.

So he's hobbling along with sore muscles......bent over with a bad back......kicking out his hind leg to get that tricky knee back in place.....with his right arm hanging limply at his side.  If he's taking all his self-administered medication there's a good chance he'll have a drug dependency to round off his fantastic good health in no time.

So as he left this morning, I called an encouraging farewell...."See you in the hospital"

Who thinks Hubby will survive the cricket season??......remember this is only week 2!!!
Posted by Angels have Red Hair at 17:29