It's fair to say that Buster is not having the best of weeks, see what I mean here.

This morning I had to take him to the vets for a final injection in a series of four he had been having for his tricky knee (otherwise known as his luxating patella).

As always he was happy to take a car ride...not so happy when he saw our destination.

With a little gentle persuasion (read dragging by the lead, while he tries to dig his claws into the asphalt) I managed to get him inside.

He proceeded to let his displeasure be known by barking thunderously at any dog he decided he didn't like.  There was a maltese and a poodle he was prepared to tolerate...but an unsuspecting cocker spaniel felt the full force of his diatribe....and don't get me started on the two huge unknown breeds that came in.  They watched slack jawed as he just about turned himself inside out in his efforts to fling abuse at them....definitely a case of small man syndrome.

Finally the vet called us in and peace was restored to the waiting  room.

As I mentioned, this was the fourth in a series of injections and Buster was wise to this caper by now.  He had absolutely no intention of even allowing the vet to examine him.  She suggested that she might examine him "out the back", that's where the naughty dogs go, and I suggested she might like to jab him while she was there.

He came back in wearing a little muzzle, oh the shame, as this was the only way she could give him his once over.  By the time she had him on the table, he had managed to escape the muzzle entirely.  Once it was back on she decided to give him the needle...quick...but not quick enough unfortunately.  Despite my complete lack of training she decided it was a good idea to get me to hold him....don't think she'll be making that mistake again anytime soon.

I wrapped Buster in my arms...she approached with the syringe....placed the needle against his skin....hesitated for a millisecond and.......he performed a triple somersault with an inward pike and landed at the end of the examination table.

The needle hung forlornly at a 45 degree angle from the syringe....the vet was bleeding from a scratch right across the back of her hand....I hung my head in embarrassment and shame and began apologising profusely......Buster grinned.

The vet gathered him up....smiled....murmured things about superficial wounds....and returned him to "out the back".

He was returned to me by the nurse...the vet was receiving her own clinical care....and I apologised again....."Guess he has a reputation here"......she didn't deny it.

I paid my money, bought some worming tablets I didn't really need to prove what a good customer I am...and fled.

The nurses final words were ringing in my ears....."He's a little dog with a big personality".....somehow I don't think she mean't it as a compliment! 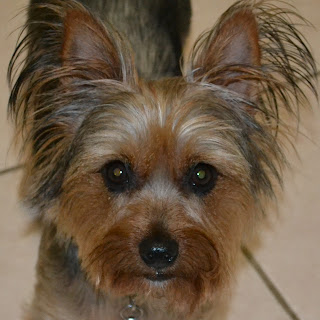