The 2012 AFL Grand Final.....between Sydney Swans and Hawthorn Hawks......is almost upon us and we have a monumental few days ahead.

We leave in the morning for Melbourne....a mere 10 hours away!!

We need to drop Buster at the Vets by around 8.00am...where he will be enjoying a short mini break.

Then with a car laden with essential supplies..... 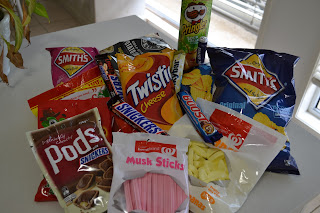 
We will wake up bright and early, and make our way to Melbourne in time for breakfast at a friend's house by 9.00am.....that's another 3 hours drive.

By 11.00am, according to Hubby's meticulous timetable, we will be on our way to the MCG.

For those that don't know, that is the Melbourne Cricket Ground which for whatever reason is known as the home of AFL Football....I sense a man's involvement in this confusing state of affairs.

The game begins at 2.30pm, and hopefully by about 5.30, both the Sydney Swans and we will be performing a rousing victory dance!

I'll be muttering things about criminal wastes of money and ridiculous harebrained schemes that only Hubby could come up with.....and Hubby will be coming up with plans....like not eating and living by candlelight for 6 months to recoup his losses.

We need to pick up Buster before 6.00pm on Sunday....otherwise his mini break becomes a maxi break.....because we won't be able to pick him up until Tuesday.  Pesky vet will be enjoying the long weekend.

It promises to be a very long, exhausting weekend....that will either go down as one of those great "I was there" moments....or a senseless waste of time and money......and it all depends on the result of a single game of footy!!!