There are lots of blogs about cooking and they are filled with recipes and pictures of delicious things......and I like them, I really do.

But I wonder where they get their inspiration from.

I don't mind cooking....(though I prefer not cooking)....but I find the hardest part is not the preparation, its not the frying or the baking or the grilling, it's not the mixing or the basting or the searing.

It's deciding what to cook.

It's finding inspiration from the unexciting contents of my fridge and pantry.  It's coming up with some idea that does not involve me running out to the supermarket at 5.00pm.  It's creating something that will be eaten by ALL members of my family.

My kids don't do green vegetables, they don't do yellow or red either, they might do orange at a push, but they complain!!  They won't eat anything leafy, or anything with a watery crunch.  They don't like fruit and they don't like fish...fresh or tinned.  They won't eat fried rice, stews or anything with red wine in it.  They won't have mayonnaise or mustard...and they will only have cheese if it's melted.  Basically anything natural is out...anything processed has a small chance of consumption.

Hubby won't do fish, or any other forms of seafood unless it's covered in batter.  He won't eat stews, or curries and definitely no apricot chicken.  He likes peas and ham...but don't give him pea and ham soup.  He will not eat rice in puddings, no food with a strong smell and definitely nothing reheated.  No pork chops or spare ribs or bacon with rind.  Oh and no vegetables in cake. 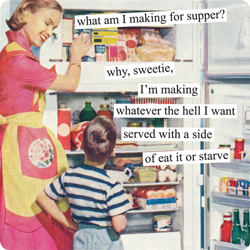