We received some sad news in our house last night.

My Uncle Tom had passed away the evening before.

I last saw Uncle Tom back in April.

We travelled back to my home town of Dorrigo to celebrate a special birthday for his wife, my Auntie Nell (she's my Dad's older sister).

I must point out at this stage, that as birthday's go it was a pretty momentous one.

One hundred years on this earth, and the vast majority of it spent with Uncle Tom (I believe they celebrated their 75th wedding anniversary the previous year).

Up until only the last few weeks they had remained in their own home, where Nell was looked after  very well by Tom, who at only 97, was just a young whippersnapper.  (She must have been the original cougar).

Last time I was in their home,  Tom was making cups of tea...boiling the kettle on their original wood fired stove, still working in the garden (he was proudly growing daffodils to be given to the Cancer Council for Daffodil Day), and he was thrilled to be given the chance to reminisce about the old days with Hubby.....who loves to hear a good story.

Sadly they moved from their home only a couple of weeks ago to a local nursing home.

I'm feeling for Auntie Nell at the moment....imagine spending over 75 years with someone....I know we curse our husbands at times....and they drive us up the wall....but after 75 years you'd be kind of used to having them around.... 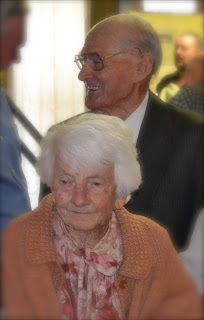