Patients and the Perils of Laundry Day......

Both my boys are very good at appearing to be terribly ill at 7.30 in the morning and then making a miraculous recovery by about 9.15.

But occasionally they say they feel sick and they really do!!

Here's a few signs to enable you to tell the malingerer from the invalid.... 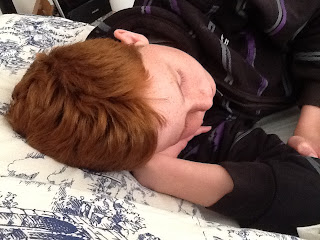 so did the dog, but that's not so unusual 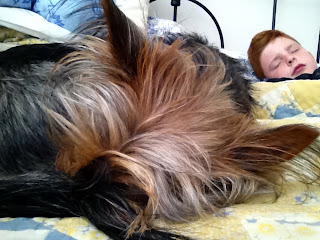 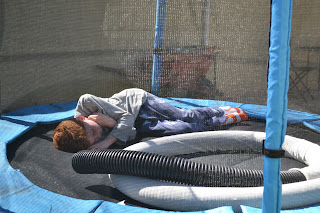 Poor Master 12 had a day like that today, there was some improvement by the end of the day, but I'm guessing it will be another day at home tomorrow.

Master 15 also spent the day at home, secure in the knowledge that he has a Doctor's Certificate giving him the whole week off.  I keep reminding him that he doesn't actually have to take the entire week off, and if he is feeling better the Doctor is not going to chastise him for his early return.  He declares that he sincerely doubts he will be ready to go back before the week is up...but his smug smile is a dead giveaway of his evil plan.

So nursemaid was my major role today.....though in between drinks, panadol doses and general coddling and cuddles, I managed to get my laundry done.
The beautiful, warm sunny day couldn't go to waste and I had a huge pile of dirty clothes calling my name.  So first load was done and ready to be hung on my handy Hills Hoist.

The line had been left up high from the weekend when Hubby and Master 12 had mown the lawn.  So my first job was to crank the handle and get it down to a level where I could actually reach the lines.  The whole mechanics of it are useless and falling apart, so you actually have to hold the whole handle on as you turn it...otherwise it falls off in about 3 different parts...this done and I start to hang the clothes.....I had about 2 lines filled when I got that sickening feeling that I was not alone....... 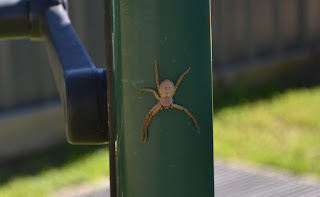 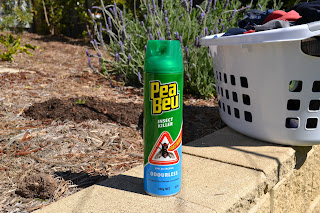 So.....Sir Beu was employed to do what he does best...and at first my not so little friend tried to escape 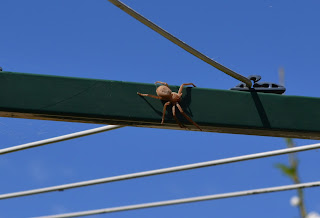 ....but his bid for freedom was short lived (as was he)...he fell to the ground...and with the handle of my broom.....he was dispatched to spider heaven.

On closer inspection, I don't think this was the first misadventure to befall him...he was suffering a severe deficit of legs on the right hand side!  Though he might have lost them in the handle when I put down the line...eeek.....I shudder to think!!